Save yourself a lot of money by avoiding smart TV’s and still get all of the voice command, Netflix, HBO, among 2000 online streaming channels, in the new Sharp television series with built-in Roku’s. 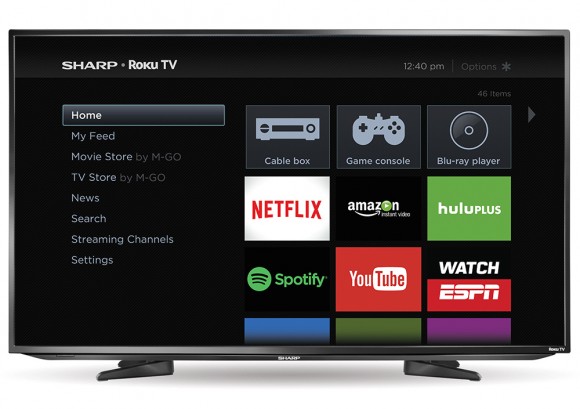 The inexpensive Roku boxes and sticks have been on the market for years now leading the way with a comprehensive software platform that is often far better than the “smart” features included with uber-expensive TV’s, and yet these sticks and hockey puck sized devices instantly plug HD and high speed streaming into any model TV (with an HDMI input).

Why spend two or three grand on a super smart LED model that’s clumsier software will be obsolete, despite their rare updates, while the Roku’s software is constantly updated and upgraded?

Best Buy is on board with an exclusive release of Roku-infused TV’s from Sharp coming out this month.

So far there are no plans for Roku’s platform to makes its way across all of Sharp’s smart TV’s, but the future may see Roku upgrading more.

Roku has upped their game by allowing live TV, and its newest update upgrades owners of current models so that with the help of an iOS or Android App can make voice commands to operate searches and functions within the Roku OS.

The newest Roku 3’s will have the microphone built-in or offer its remote control to owners of sold units who do not want to use their smartphone to control things via the tongue.

The Sharp TV’s remotes will be styled with Roku but also lacking the microphone (meaning you had better download that voice App if you cannot press buttons anymore; it is a tedious activity, I know, folks).

The Sharp Roku marriage could be an affordable way to an entertainment powerhouse in the living room.