Think about it 21st century computer users and perusers:  what does every desk need to function properly?  In one word…robots! 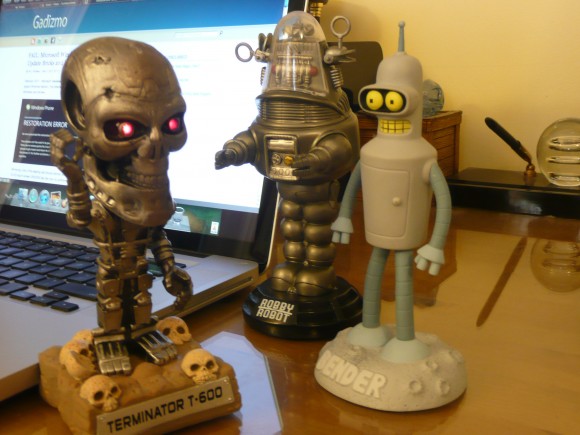 Funko, the makers of all things fun (pun intended), have been releasing alarmingly detailed bobble-heads for obscenely low prices.  They specialize in popular culture characters from movie, TV, comic books and more.  Whose desk would not be instantaneously more enjoyable with a 99-cent Iron Man bobble-head?

Most of the Funko bobbles are about ten bucks on Amazon.com, but the prices vary from “very” cheap to “the shipping costs more than dirtily unbelievable funko” cheap.  Take the office space or cubicle hell and turn it into a robot battleground as the detailed Terminator T-600 battles with the pointy eared Spock (from Star Trek) and our very own grinning President Obama!

I personally adorn my writing glass-top with a vintage looking Robby the Robot, whose gears and gadgets appear just as they did on the silver screen.  Robby starred in the sci-fi geeks classic of yesteryear Forbidden Planet (and if you claim to be a nerd or science fiction buff and have not seen this great film than you are banned from the club as of right now).  To keep Robby company is a Terminator whose eyes light up red whenever he is touched or bobbles and the beer chugging robot (only for fuel) Bender from Futurama!

Can the dead nuts accurate C-3PO and R2-D2 Star Wars bobble heads stave off the end of the world plot of the rotund cheesy puff stuffing Cartman and Alan from The Hangover?  I can think of no better place to conduct these serious robot wars than the comfort of one’s own computer desk.