With this Spring comes the new season of the hit HBO series Game of Thrones and also . . . a Game of Gnomes! 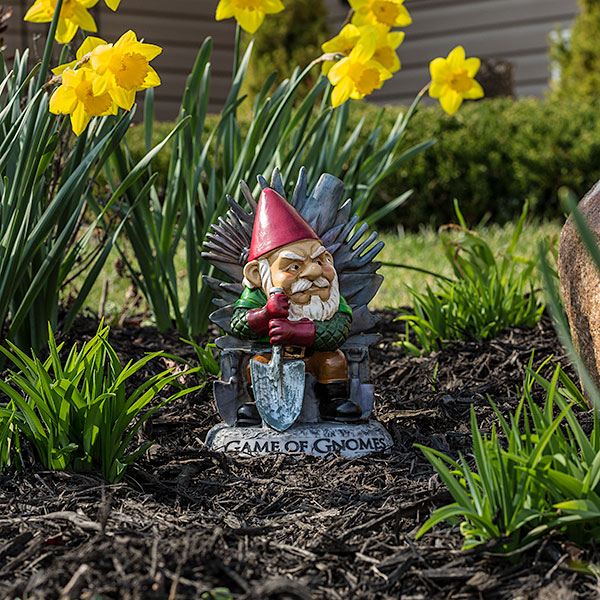 Who will attain the Iron Throne in the garden?

This Geek Weekly look at a menacing looking warlord on the high seat will surely scare away any gophers approaching the borderlands.

The Iron Throne is made of melted spades and pitchforks and other essential harvesting tools taken from the dead hands of this particular gnome’s enemies.

But wait there is a story here that neither G.R.R. Martin (who has, sadly, now been leapfrogged by the show in terms of the storyline of the show versus the author’s books) nor the HBO series Game of Thrones has yet to reveal.

Let’s call the aspiring gnome king Larry, for all intents and purposes. Larry started a rebellion amongst the peasant garden gnomes in the fall. His campaign slogan: winter is coming, so let me harbor spring, let me watch over and let me protect all resonated with the people.

The PR campaign came across in spades (pun intended).

As thousands flocked to Larry’s red banner, reflecting his rosy cheeks and his infamous scarlet hat, he directed his rage at the current King Joffrey, as the main target for his burning revolution. Riots ensued in the streets all about the Garden Throne, as the king prepared for the most decadent of feasts and celebrations. But what could such a ragtag group of tiny resin gnomes do against such conniving, such hatred, and such weapons as the Garden of Westeros could throw at them?

The answer is quite a lot actually. 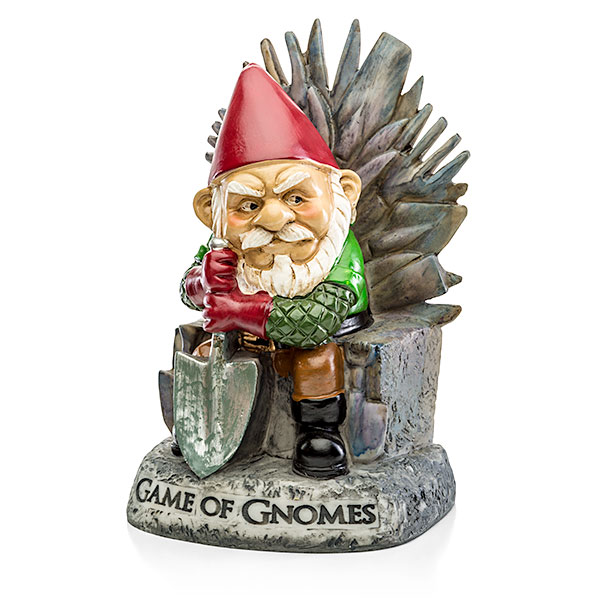 While the big men, and even a little man named Tyrion, spilled blood and succumbed to strife across the wide country, Larry seized the distraction to deftly creep up on the party . . . literally.

As the King began his wedding and the goodly future Queen Marjorie waited for her torture at the evil Joffrey’s hand, Larry crept ever closer to the table. Being a garden gnome, it turns out, gives you all kinds of access to garden weddings. And Larry was promised certain savory favors from the future queen.

There Larry was, with an army carefully hidden amongst the shrubberies about the castle, and he tip toed to the table, added a drop of poison to the king’s cup, and tip toed away in a twinkle of the eye. Standing right on the edge of a mulberry bush he watched as the evil king choked and turned blue in anguish before finally dying. Larry, the Officially-licensed HBO’s Game of Thrones merchandise Game of Gnomes had his throne.