There are many universal remote controls available on the market and they are not only expensive, counter-intuitive, and boring, but they are not programmable wizard wands like the Kymera Magic Wand Remote Control.

With a flourish of the wrist, wand in hand, The TV turns off, then on, and then the channel changes.

That’s right Harry Potter, Magicians, and even Lord of the Rings fans, this wand or short staff resembles a magical piece of wood, and by flicking it in a resolute motion it will awaken the TV.

The Kymera Magic Wand Remote Control sells on Amazon for eighty bucks, and aside from working on nearly any electronic device that uses a remote, it also has thirteen programmable wand moves that will do give the said devices thirteen different commands.

Well, twisting this ornate wand counterclockwise results in the channels scrolling forward, as raising the Kymera dramatically up or down pauses and plays The Beastmaster as he tears apart hordes of barbarians within the Blu-Ray player’s depths. 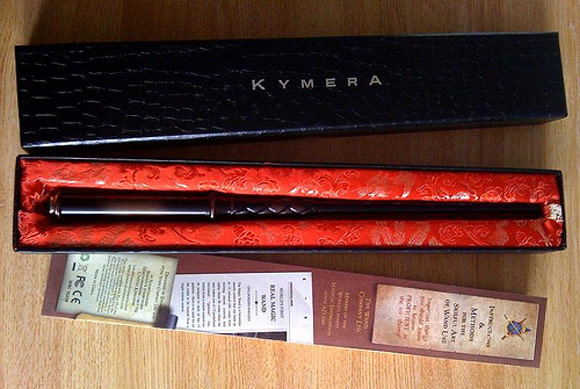 Conjure up the DVR recordings, the audio receiver’s surround sound system, and the TV’s Netflix with the flick and swish of the Magic Wand.

The dark wood design, the gorgeous handle, and the easy to master controls certainly appear to be an authentic use of the supernatural.

Keep guests and yourself enthralled by the whims of the unparalleled Kymera Magic Wand Remote Control and watch as the Olivander-like box offers up a spell-casting weapon of entertainment!