It’s winter and it’s snowing… again. Your beloved dirt bike is collecting dust in the garage worse than the top of the TV at Nana’s house but, it doesn’t need to be. 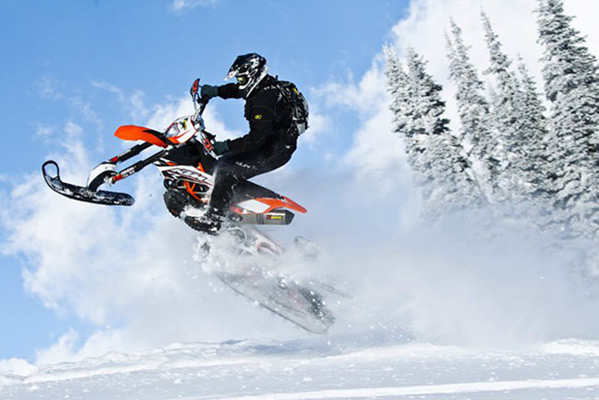 With the Mountain Horse snow bike conversion kit from Timbersled you could head out for a relaxing ride through the deepest of powder or even venture into your snow covered frozen hell of a town to get the all-important gallon of milk.

The standard kit comes fully assembled and ready to install including everything you need to convert your dirt bike into a snow bike. They will even color match your kit for a small fee. 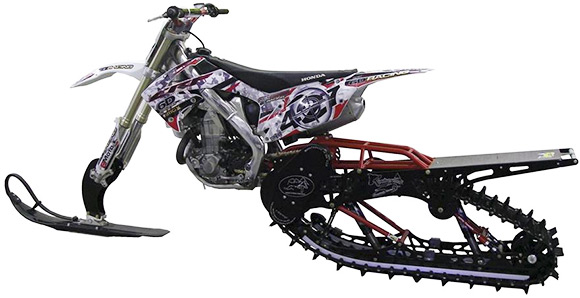 Timbersled says the kits can be used on bikes as small as 250cc but, recommend the product be strapped to a 450cc bike simply because, more power is always better. It might not climb a hill as fast as a traditional snowmobile but, with its thinner and more nimble frame it will squeeze through tighter trails, turn on a dime, and even traverse steep hills sideways.

And if it does ever roll onto you, its 200lbs lighter than a typical snowmobile – less broken bones!

The creators of the Mountain Horse kits liken the product to first generation “single stick” skiers (AKA snowboarders) and hope that one day, like snowboarding, you’ll see just as many snow bikes laying tracks on the backwoods trails as you do snowmobiles today. Judging by the video, they might be right.

The cost for being able to ride your bike year round? Around $5500, which is about what you would pay for a lower end snowmobile but, you likely won’t have as much fun.