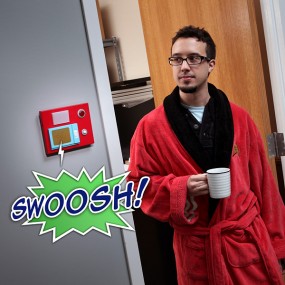 The sounds of the 23rd Century have imparted themselves on the likes of our own contemporary doors with the Swoosh of an Enterprise door, or a Red Alert siren sounding once someone crosses the doorway of the officially licensed Star Trek Electronic Door Chime!

Picture the cubicle all but secured via your troll army except at the inevitable opening. Since you cubicle-fortress has no door, there is nothing to stand in the way of your boss simply slipping past the guard and eavesdropping on your Facebook chat. That is unless a Star Trek RED ALERT siren sounds off as soon as the pink tie crosses the cubicle gate’s threshold!

How does this science fiction become reality, you ask?

Well the communicator clone has a motion sensor that detects whenever someone walks through the doorway (genius).

This Star Trek communicator wall unit does everything except have a Klingon leader screaming bloody hell on the other end after pressing the button yields the patented Communicator Whistle.

Science fiction has never been more vintage or sexier than it is now that these functioning communicator replicas from the TV show Star Trek: The Original Series are freely available to be installed easily into anyone’s home or spaceship.

For less than thirty bucks on ThinkGeek, you can purchase your own Star Trek Electronic Door Chime (though sadly the AA batteries are not included). 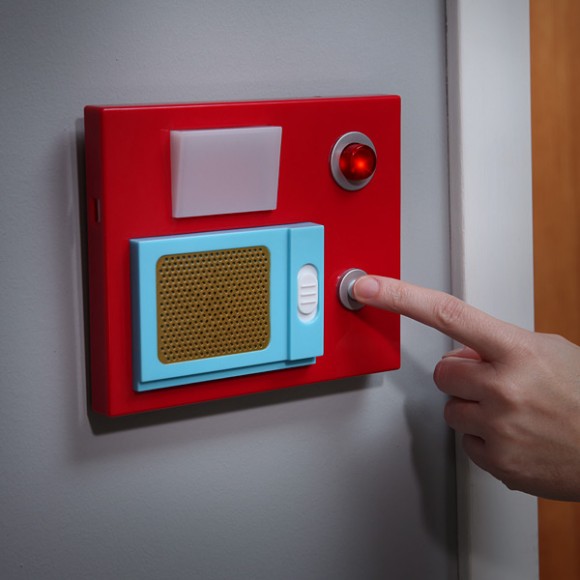