You can’t call your mom with Samsung’s new Galaxy Camera, but it will let you upload images to Facebook and let you play solitaire while your waiting. Yes, the Galaxy is Samsung’s new digital camera with an Android smartphone… ahem “media device,” built into it.

Samsung promises the new all-in-one camera/phone device will be “the only camera you’ll ever need.”

The Galaxy, which has Wi-Fi and 3G connectivity, is a new hybrid that is more parts camera than smart device, but has almost all the options of both. Powered by Android’s Jelly Bean operating system and presented on a slick, wide 4.8” inch LCD screen, perhaps the Galaxy is Samsung’s way of adapting to a withering demand of simple point and shoot digital cameras that stop at just taking pictures.

Most people these days are saying, “Wait, why do I have to connect my camera into my computer? I can just take a picture with my phone and upload to Instagram, right? Why do I need a digital camera anyways?” It seems like just yesterday when the cameras on most phones took nothing but terrible, out of focus 1 to 2 pixel images and a “digi” point and shoot was a much-welcomed companion. 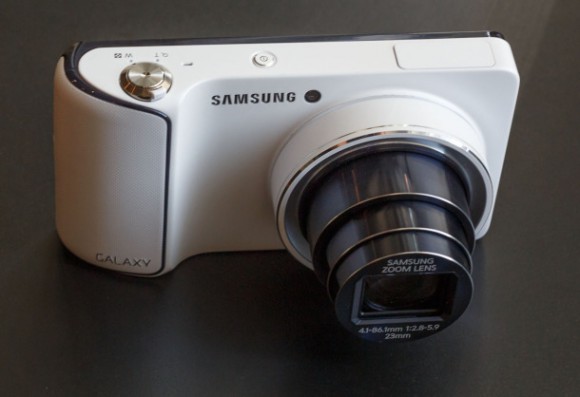 Enter the Galaxy, which is probably a years long evolution of the fickle and mysterious laws of consumer desires mixed with companies deciding what the consumer wants in the first place. Samsung’s Galaxy is a perfect amalgam for that shutterbug who wants to the ability to control post-production using a series of apps directly on the camera itself, but also wants to take much higher quality pictures and never wants to plug their camera into a computer again.

The iPhone 5 takes 8 mega pixel images; the Galaxy takes 16 mega pixel images.  Most smartphone cameras do not zoom; the Galaxy has a 21x zoom, except if you take a picture through one of the many apps to make your images look “vintagey.” You can also talk to the Galaxy with an amazing voice control option. In the end, the Galaxy might be bringing “companion status” back to digital point and shoot cameras. You can buy Samsung’s Galaxy at ATT with 3G connectivity for $499.00.