In 2012, look for the Roku Streaming StickTM to become the end-all addition to High Definition TV. Or at least it will be if consumers want their TVs to remain true Smart TVs.

The inventors at Roku have been busy taking their astonishingly tiny and fun Roku 2 XS set top box (yes, the hockey puck-sized one) and they have shrunken the streaming player even further.

This flash drive-sized device will make any TV with an HDMI input a Smart TV capable of streaming Netflix, Amazon Video, and hundreds of other media through the most intuitive interface of Roku, and all of this will not require a single cable.

Why in the world would anyone want to wire up an HDMI, a power adapter, and an Ethernet cable into a hockey puck when they can simply plug a flash drive-sized Roku StickTM directly into the TV’s HDMI port? 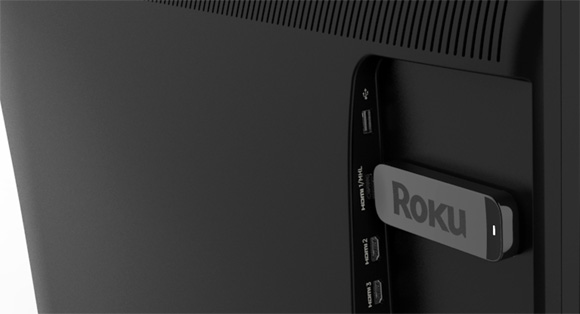 One reason, is that I for one already have a Roku 2 XS, and it is not only one of the most entertaining pieces of technology that I own (Angry Birds and Netflix included), but it is streamlined and smooth in its streaming experience.

The Roku Streaming StickTM, however, is an HDMI inclusive, streaming, wireless wonder.

All of the Roku 2 XM’s power will be transferred to its evolved descendant.

Even a top of the line seventy-inch Sharp masterpiece of a television, a 2011 model, does not offer up the kind of smart TV experience that consumers desire most:  an easy to use way to traverse the Internet and movie streamers, like Netflix.

The Roku software is unparalleled in its intrinsic dashboards that allow anyone to easily navigate the myriad shows, movies, and documentaries on Netflix, Crackle, Amazon, and Hulu.

And Roku has packaged its entire platform into a tiny cable-less package that is powered via the same HDMI port that it uses to access the TV and transform it.

The only downside visible is the lack of a high speed Ethernet jack, but the Roku Streaming StickTM uses the fastest wireless means of connecting and its software could possibly allow it to use the TVs internet connection, since most new ones have this option to plug in.

Look for the StickTM to appear in Best Buy around the close of summer. 2012 looks promising already.