A Wi-Fi blu-ray machine with 3-D, FLAC audio, and a sleek and sexy player fits in the palm of your hand? Wow! 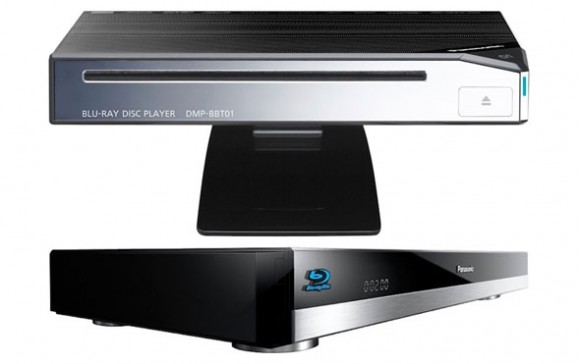 Panasonic has long been considered one of the top shelf brands when it comes to consumer electronics, and their new lineup of blu-ray players will prove to greatly evolve the high definition movie environment.

One of the newest models revealed at the CES 2012 show was the Panasonic DMP-BBT01, which is like a shinier and skinnier black Wii. And yes, not only do these bad boys fulfill Netflix, Skype, and Amazon VOD via Wi-Fi but also smart phones, which can be used to function as the system’s remote control (so hunting down that damn remote that the cat, Cosmo, swiped far under the couch won’t be necessary).

Panasonic’s been noted as having the top of the line blu-ray players and since the HD movie experience has come into its own, they’ve done nothing but improve upon their intuitive and efficient designs.

The sound will be better now (and it was already adept at surround formats before, folks), as the new models use the audio codec FLAC, an audio format similar to MP3, but lossless, meaning that audio is compressed in FLAC without any loss in quality, and the new sound environments provide a tube amplifier-like warmth.

Perhaps the greatest innovation for the 2012 blu-ray models – and reason for shelling out somewhere between a hundred and three hundred bucks on an upgrade – is the VOD 24p output. Panasonic’s newest technology syncs the content on the discs and the playback with the original 24 frames per second video format, and this produces unbelievably life-like and film-like quality motion characteristics. The result is that each frame is uniformly converted, and therefore, more natural (and flicker-less) images are reproduced to complete the ultimate in-house theater experience.