Happy Tesla Day! Go Ego Battery Self Propelled Mower go, because it is Nikola Tesla’s birthday Inspector Gadget and everyone is going to celebrate!

What does Tesla have to do with a 56 Volt Lithium-ion battery powered marvel of mowing?

I am glad you asked.

For one thing watching the Ego battery charge is like playacting Richard Dreyfus while watching a U.F.O. land.

Nikola Tesla was once hired by notorious patent fiend Thomas Edison (patents may have made him an inventor even if a lack of inventing things himself did not) to improve upon D.C. electrics capabilities. 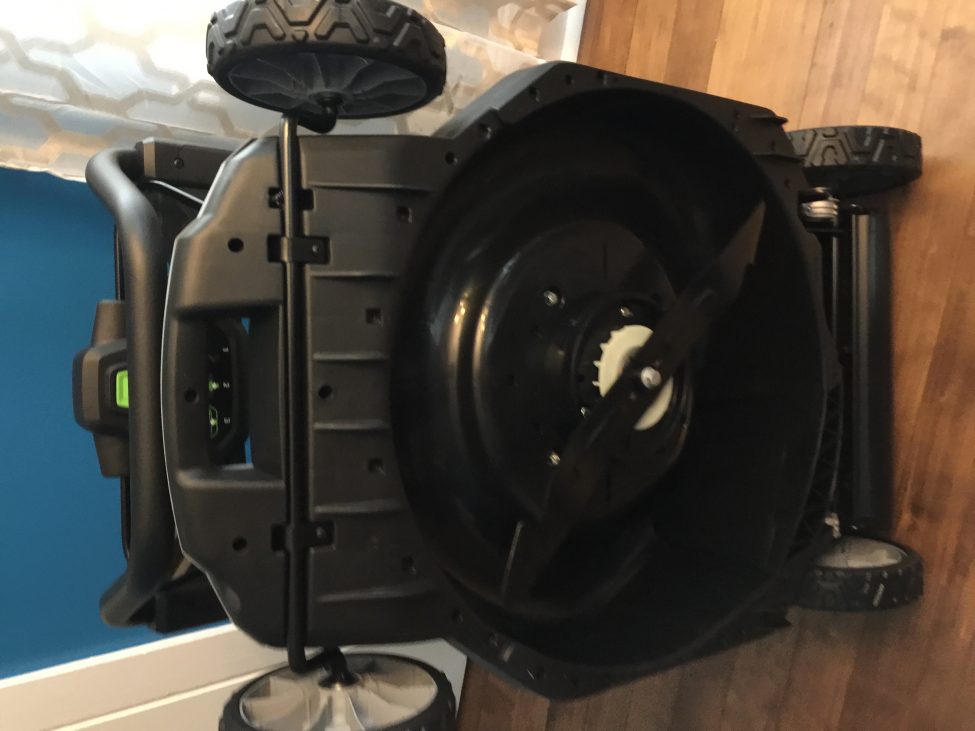 Edison laughed about paying him his promised bonus reward for the job, saying that it was an American joke.

Mr. Tesla left the Edison factory and went on to invent the A.C. electric that powers our houses, their wall outlets, and then charges the Ego electric lawn mower’s battery in less than an hour.

This Hands On Review of the Ego 21 in. 56-Volt Lithium-ion Cordless Battery Self Propelled Mower with 7.5Ah Battery is dedicated to Nikola Tesla on his birthday. 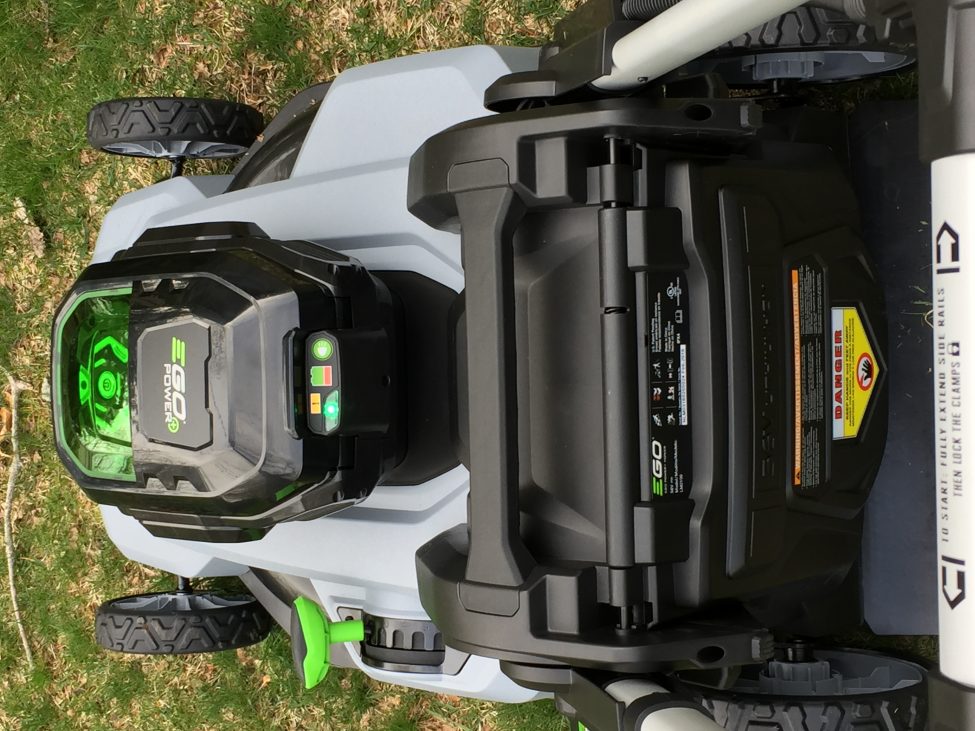 You see without improved D.C. technology the super powerful batteries that allow for solar home generators and electric cars, yes Tesla’s too, would not be possible.

And the Ego Self Propelled mower has the horses and the torque to pull me across the yard at a fast pace.

I am about six feet tall and a hundred and seventy-five pounds.

The Ego 56 Volt Self Propelled Mower can and does drag me, especially when I forget to let go of the gas pedal, I mean lever.

The claim is that this little guy can mow half an acre of lawn on a charge.

After many uses, I can attest to it doing more than half an acre and with plenty of charge to spare.

There is no messy oil or gas needed for this bad boy. Simply charge up the Back To The Future looking battery pack and click it into the place where a traditional lawn mower’s engine normally would go. 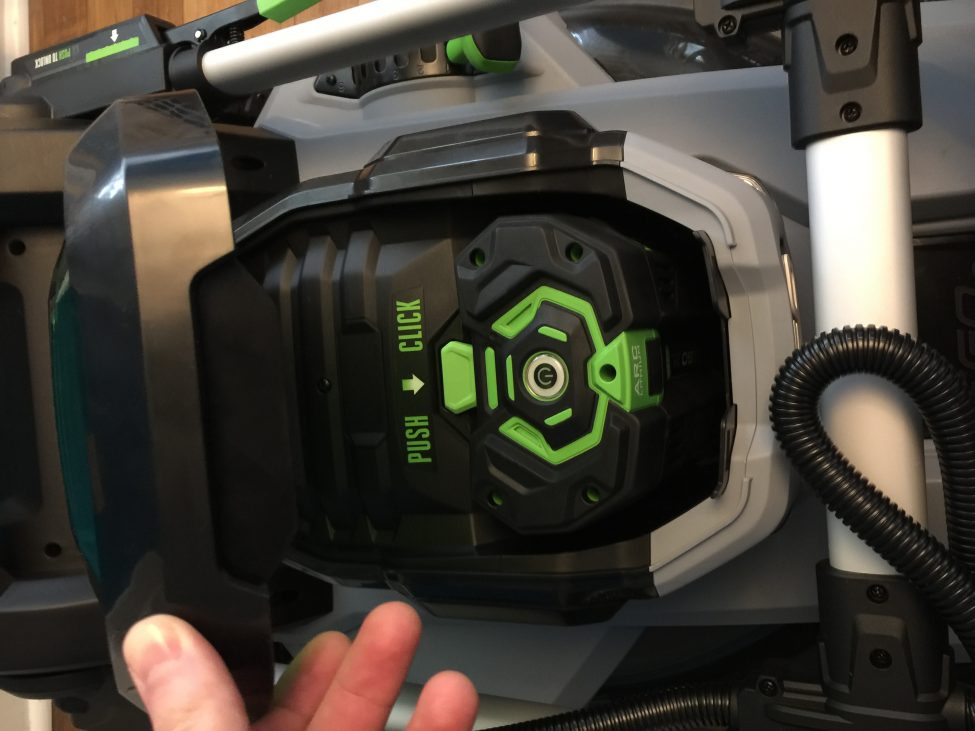 The heavy battery pushes in with a snap, the handles easily release from a neatly folded and stood up position to a normal mowing position with all four wheels on the ground.

And you are off to the proverbial races with a lever on the left that gives you snail speed all the way up to tortoise and then on to Fred Flintstone fast.

But you do not need to use any foot power except when edging or popping wheelies turning corners if you mow at top-speed, like this proud lawn owner does.

I like to go fast, and I like that with little effort this mower does over half an acre of thick grass, mulches it fine, and gets me back to my ballgame after only forty-five minutes to an hour.

There are even headlights on the Ego mower if you want to mow at night (it will be cooler and the bugs will happily feast on your juicy carcass as the mower drags you on and on and on).

Zika virus aside, the Ego is light, yet strong and could not be easier to operate.

Plug in your charged battery.

Push the start button and pull back the safety lever that anyone who has mowed a lawn is all too familiar with and he fires up.

Now to take full advantage of the Ego’s Self Propelled model simply squeeze a second power lever with your right hand and with a second of delay the mower will kick off on its own.

A lever to the left moves down to increase the speed.

Near the wheels is a lever with fiver different heights to cut by.

And the wheel base width of 21 inches is standard mowing size, not extra wide but not narrow either.

The price of $599 is well worth it, especially when you get it on sale at Home Depot for fifty dollars off of that and interest free credit for 12-24 months!

Mr. Tesla, I thank you, my wife thanks you, our puppy thanks you, and so does our lawn too.

Leave a Reply to Hina Butt