Tier One Electronics’ new Lightbulb Speaker Kit will give people with synesthesia (a pyscho-perceptual condition of mixed sensations where people might see smells and hear colors) something to really trip out about. “Imagine a world where sound was light and light was sound,” is of the taglines of the lightbulb speaker combo. The bizarre creation might give anyone something to trip out about.

The LED light and speaker combination is exactly what it sounds like. A pair of 5 watt LED light bulbs that you can screw into a lamp that have a 10 watt speaker amplifier inside them. The set also comes with an iPhone docking station which provides controls for both dimming the lights and volume but, it should be noted, the speakers can pick up music, wirelessly, from any device.

On it’s surface, the lightbulb speaker might just seem like another weird gadget, but if you look closer it could be a new trend in more experimental forms of LED lighting. Also, having your speakers wirelessly embedded in your lighting system can significantly save space in your house and cut down on the clutter of all those wires.

The company claims that their product is the first of it’s kind, but other companies have definitely integrated speakers and lightbulbs before.  Perhaps these lightbulb speakers are a technological evolution from previous models – they always say that it’s the second guy or gal that does it better. 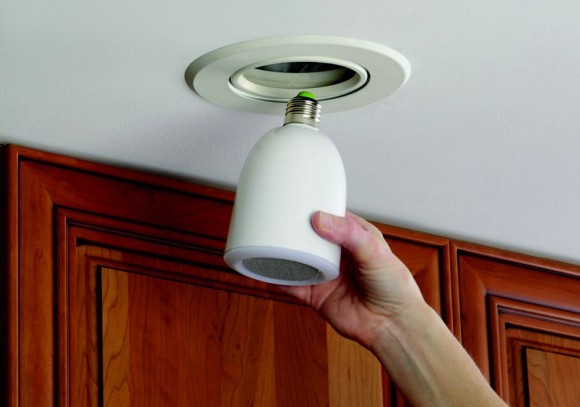 Once everything is set up, playing the music is as easy as flipping the light switch. As strange as that seems, it all somehow makes sense, especially coming from a British technology company. It doesn’t really say anywhere as to how long the bulbs are supposed to last, but the company promises that they last a long time.