The motto of the ELP Laser Turntable is No Contact. No Wear. and for good reason as the device plays pure, uncompressed analog deliciousness from your vinyl records without spinning or even touching them.

How sexy is that, music lovers?

The laser picks up the analog sound right out of the grooves in the records without having to spin or put a needle to them.

The first ever sound recording devices for records consisted of a spinning disc of clay attached to a microphone that literally captured the sound waves being belted through Louis Armstrong’s horn and then the clay mold was used to print onto vinyl disc records to play the 100% analog sound in high fidelity.

The uncompressed analog is almost as sweet a sound playing out of your player as it was for those standing and marveling in the same room as Mr. Armstrong. 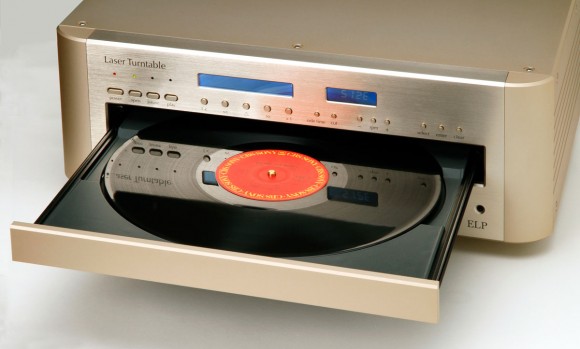 Records have a huge upside when compared to the tinny, often stripped down recordings downloaded from iTunes or Amazon.

And though compact discs have more audio information (thus better fidelity), they are still often a shell of their larger vinyl versions.

The downside though is that records are physical discs that wear out as they are spun and a needle is applied to their grooves for picking up the sound embedded there in a galaxy far far before digital.

Well wipe away the worry about wearing out your irreplaceable Charlie “Bird” Parker concerts and dancing to the furiously marvelous improvised sax soloing, because the ELP Laser Turntable has perfected a new technology made to read and play the music with the record being suspended in the machine.

The ELP Laser Turntable does not risk warping your vinyl on a turnstile or wearing away the delicate grooves to the point of non-playability, as the laser scans and feeds our ears the sweet sensations we crave.

Just be sure if you love your music, you drop the $15,000 needed to preserve it forever!

Can I get a little Marvin Gaye in here?