California has birthed Silicon Valley, Skynet, and now the world’s single biggest solar operation at the Ivanpah Solar Electric Generating System, which immediately accounts for nearly 30 percent of all clean, solar energy in the US.

Can they do that? Apparently, much to the chagrin of the oil companies, they can.

Ivanpah Solar went online on February 13, 2014 providing enough output to feed 140,000 California homes and all of our iPads and other plugin goodies held within with clean, renewable energy.

How does it work?

There are three giant boilers on the grounds and each of their myriad heliostats follow the ever shifting sun so that the garage door sized mirrors can efficiently reflect the California rays up to create steam, which in turn spins the energy producing turbines. 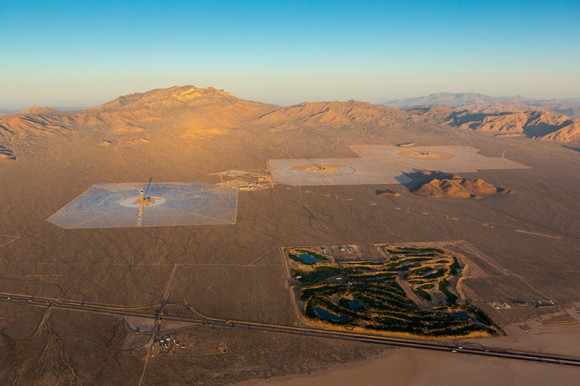 The company in charge is NRG Energy, Inc. and they had the help of Google, BrightSource Energy, Bechtel (on the engineering, procurement, and construction end), and the government, of all places, with a $1.6 billion loan guarantee from the US Department of Energy’s Loan Programs Office.

What does this advocacy of solar on such a grand scale mean exactly?

It means that everyone who has been saying that it is not cost-effective to build and maintain solar panels and batteries (and that you lose money investing in solar) has something new to chew on that might change their minds.

The project, which began in October of 2010, has provided thousands of jobs and is expected to continue that trend for decades with ongoing construction.

As BrightSource points out in their press release: the project is the first to use BrightSource’s innovative solar power tower technology to produce electricity, which includes 173,500 heliostats that follow the sun’s trajectory, solar field integration software and a solar receiver steam generator. The Ivanpah plant’s total output is 392 megawatts (MW) of solar power (Doc Brown would be proud!).

Maybe the rumors of Apple’s iPhone 6 being solar powered are not so crazy after all . . .

Apple’s chief competitor worked to help bring such a mass-scale project to fruition.

Rick Needham, Google’s director of energy and sustainability, said: “At Google we invest in innovative renewable energy projects that have the potential to transform the energy landscape and help provide more clean power to businesses and homes around the world. Ivanpah is a shining example of such a project and we’re delighted to be a part of it.”

The future looks a little bit brighter when we use the sun to power our many gadgets and toys now, doesn’t it?