The easily affordable, mini UFO quadcopter from Brando zips, dips, and even flips with a simple push of a button.

As far as RC flying gadgets go, this is hands down the most fun I’ve ever had for under 50 bucks.

When it comes to power, speed, and stability the UFO is a substantial step up from those mini helicopters you see kicking around the mall kiosks but, with that speed and power comes a responsibility. If you’ve never put in any RC flight time, you’ll probably want to pick up a couple – one to learn on and one to play with after you inevitably crash and burn. Did I mention the thing does flips?

With just a flick of your thumb this zippy drone will climb 25 feet in about a second so, you’re not going to want to play around with this little gadget indoors – unless you have access to or happen live in a warehouse. Instead the manual suggests 25ft of clear sailing in any direction, especially when performing a mid air somersault, and I have to agree. Keeping the buzzing drone hovering in a little 10ft area is possible but, it’s not nearly as much fun.

As far as controllers for mini copters go, this is about as good as it gets. The substantial size makes the required delicate finesse of the device easy while making room for the on-board LCD and a bunch of options including trimming, hi/lo speed modes, and a one touch flip button. 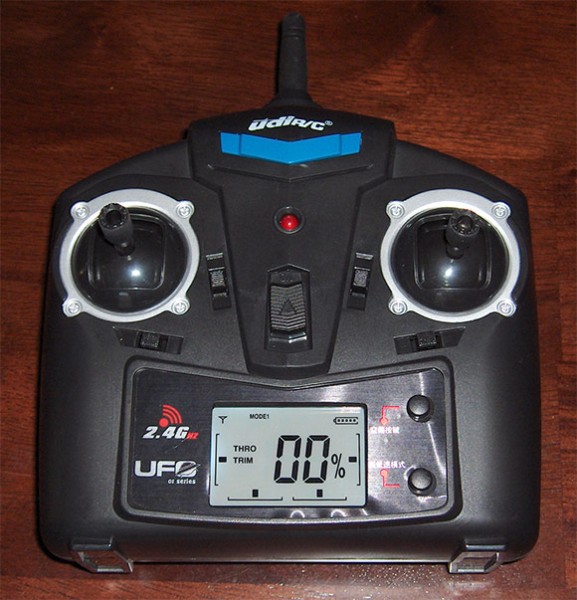 The UFO also comes with two mini 3.7v 250mah batteries and a dual port USB charger capable of charging them both simultaneously in about 75 minutes – more time flying and less time waiting!

There are also an extra four propellers included in the kit and it’s a good thing because, you’re going to need them. When the props run into any resistance they pop right off to protect the motor, the good news is, they literally pop back on just as easily (if you can find them). Unlike typical RC helicopters, there’s no screwdriver required.

In the end, words aren’t going to do my new favorite toy the justice it deserves and even my shaky video fails to capture just how much power is at the end of your fingertips but, until you get your hands on one for yourself, they will have to do.

Bottom line, if you’re ready to step up your aerial RC skills, I defy you to find something more awesome, in this tiny of a package, for less than $49.90.