Why can’t you use your keyboard as a mouse? What would be more intuitive than that? Those questions are now answered with the Combimouse, the first freestanding keyboard to put the two together, into one seamless device. 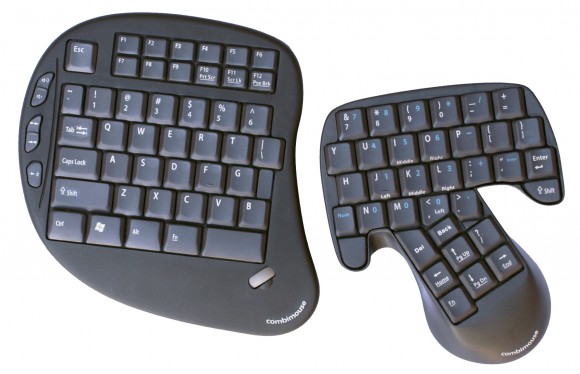 Weighing less than an Apple Magic Mouse, the Combimouse is one of those “why didn’t I think of that” devices that makes so much sense it hurts. Invented by Perth, Australia computer nerd extraordinaire Ari Zagnoev, the mouse/keyboard combo has been an obsession since he invented it back in 1999.

It still has some of that 1990s aesthetic, but it has taken close to 15 years for it to become a reality. Now it is on the crowdsourcing website IndieGogo with 34 days to raise 20 grand to get the first units out into the world.

The Combimouse works exactly how you’d think a computer mouse and keyboard combination should work. The left unit is stationary with a scroll wheel and some multimedia keys, while the right unit serves as the mouse and the other half of the keyboard.

The right half is as light and ergonomic as a traditional mouse and features a contact switch which toggles from keyboard to mouse when you’re ready to make the transition. As two pieces, the keyboard still has the keys arranged in the QUERTY system with the cut between the G and the H.

Why aren’t we all using this type of mouse on our desktops? Well, it has been a long road for the Combimouse with multiple generations and prototypes. Apparently it is harder to make a mouse than it looks. Technology has a way of advancing so fast that by the time you done with a phase of testing people have moved on. Then what?

The downside is that it is anyone’s guess as to when the Combimouse will roll of production lines and into your hands. If you make a pledge you will get a discount on a signed model with a hazy delivery date of 2014. Hopefully it will be sooner than that, but they’ve made it this far, why stop now?