Halloween is around the corner and if you’d like a one armed robot to do your pumpkin carving for you then the PunkinboT is for you.

In the meantime there is only one prototype available, created by Brian and Alex VanDiepenbos, a father and son team based in Goshen, Indiana who like to invent things and carve pumpkins. The PunkinboT, which is mysteriously spelled without the usually M in the word and a capital T, is a computer generated, mechanical apparatus that will help you carve the perfect jack-o-lantern in about five minutes.

Over the Summer, the VanDiepenbos’ unveiled the PunkinboT at the Detroit Maker Faire and picked up the coveted Editor’s Choice award. They are now making tours at local pumpkin patches with an updated version of the first model that has a few kinks worked out – and they sure are turning heads. 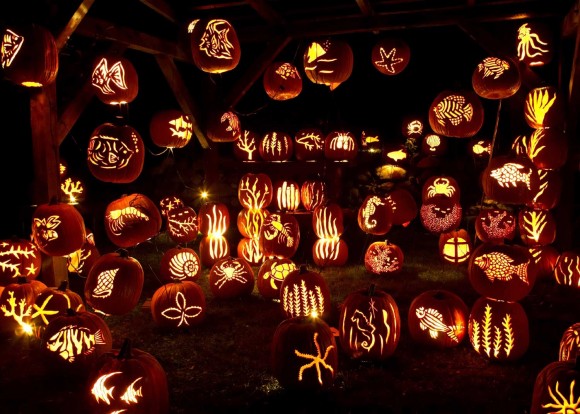 Part of the PunkinboT’s magic is in the wisdom bestowed upon by one of its creators. The younger of the VanDiepenbos, Alex, explained that the best way to carve a pumpkin is to not cut all the way through, but to lightly shave away the outside. And the PunkinboT does just that; with a screwdriver-like head it picks away at the top layer, like sculpting, to create beautifully ghoulish faces, bats and anything else you might think of might look swell on a jack-o-lantern.

The PunkinboT is also hooked up to a computer where first you create an image – then you turn the image into a code that the robot can read and voilà it gets to work. Who knows where the PunkinboT will lead these amateur inventors, but I hope their next invention will be a robot that scoops the pumpkin seeds out and makes me a perfect pumpkin pie.

If you want to see the PunkinboT in action and possibly have your own pumpkin carved you can visit Pumpkin Fastasyland in Ligonier, Indiana, which will be open until Halloween.

One Response to “The PunkinboT: A Robot That Will Carve Your Jack-O-Lantern For You”