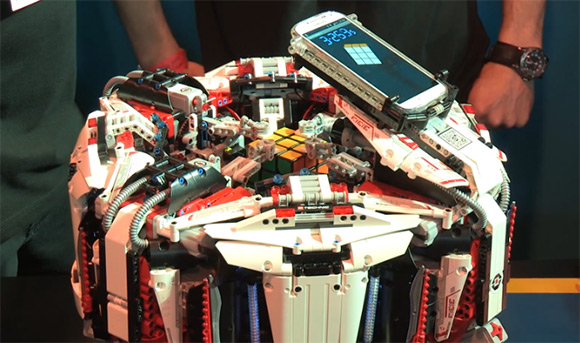 Today, at the Big Bang Fair in Birmingham, Cubestormer 3 became the fastest thing to ever solve a Rubik’s cube, in a mind boggling 3.253 seconds. That is faster than any human or robot in the history of ever.

The previous robot record was held by its predecessor Cubestormer 2 which solved the puzzle in 5.27 seconds, while the best any human could do was a leisurely 5.55 seconds back in 2013.

We should note that this isn’t your typical off the shelf smartphone. This Samsung Galaxy was on the juice — featuring an octa-core processor to control the eight Lego Mindstorm actuators at a literal blurring speed.

This robot might be smart and fast but, I for one take solace in knowing that its threat could be neutralized with one smooth swing from a Louisville Slugger – until I inevitably step on one of those tiny little foot mangling Lego pieces in the machine’s final act of revenge.