Imagine a robot that you can teach a cooking technique to, possibly after decades of perfecting a method, so that the robot chef perfectly emulates the human chef’s dish for all of time thereafter and you have the Moley Robotics cooking revolution. 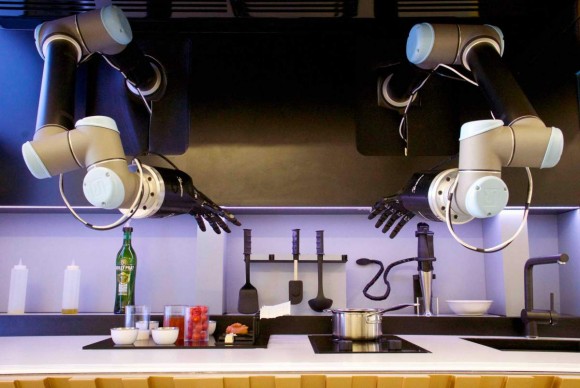 The robot chef consists of two arms and a customized kitchen built to cook from scratch in.

But can it really cook?

Well the little culinary bot perfectly constructed a delicious crab bisque in less than a half hour using the exact technique of Tim Anderson, winner of 2011’s MasterChef TV show in the U.K.

Anderson, who is working with Moley to develop the custom robot chef’s kitchen said, “crab bisque is a challenging dish for a human chef to make, never mind a robot.”

After being unveiled Tuesday at the Hannover Messe, a trade fair for industrial technology in Germany, Moley Robotics expects to revolutionize the home and restaurant branding.

Recording chef’s moves with a 3D camera and programming them into a cook book catalog will bring world renowned chefs and their thousands of meticulous recipes and methods for perfecting those recipes into the on-demand robot chef.

Each and every step is recorded and repeated by the fully automated robot chef and kitchen system that deftly washes food in a custom sink and cuts, dices, and sprinkles spices onto the crab boiling on the stove top while the bisque heats in the oven. 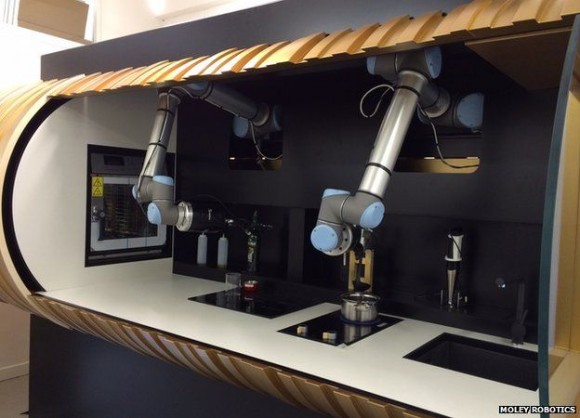 The set even includes a dishwasher, so this bot can truly make life bearable by loading and unloading your dishes.

Imagine Jiro Ono, considered by many reliable palates to be the world’s greatest sushi chef, jumps on board.

The 86-year-old champion of sushi, whose sushi bar has a waitlist of well over a year (and a meal cost akin to a modest year’s salary at that) could deliver his method everywhere through a Jiro Ono sushi bot.

The programming is simple: it requires a chef to don 3D recording equipment and make their dish.

Getting a robot to deliver the seaweed wrap scoring and shaping that Oro’s been doing for nearly his entire life may be a bit trickier.

Still, Moely Robotics is projecting a production line to hit restaurants and wealthy homeowners who hate to cook in 2017 for a paltry $15,000.

I can only hope beyond hope that Peter Pan Bakery will participate and grant my future robot chef the ability to make an unlimited amount of chocolate cake donuts drenched in frosting, like only the Brooklyn staple can deliver.