Meet CIROS, a robot that will gladly make you a salad.  It might take twice as long as its human counterpart, but c’mon give the thing a break… it’s a robot… that can make a salad and do other chores too. 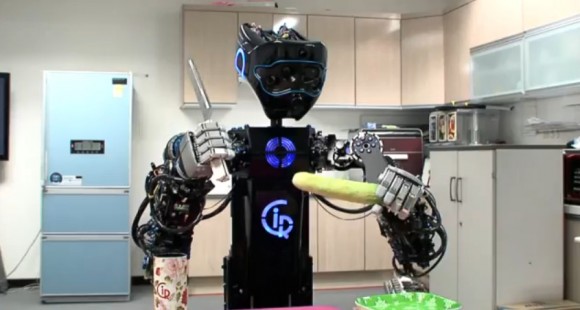 Introduced only about a week ago at Robot World 2012 in Seoul, researchers from the Korean Institute of Science and Technology’s Center for Intelligent Robotics showed off CIROS’s incredible, albeit mundane, abilities.  And while I couldn’t help my own “um-what-why?” reaction to the demonstration I quickly realized that CIROS might be a dream come true for every chronically lazy person on the planet.

Yes, CIROS, which is a few years away from meeting its full potential, is meant to be our own personal robotic indentured servant.  From loading and unloading the dishwasher, to operating a microwave and opening the refrigerator, researchers are hoping that CIROS will someday be able to prepare the meal, serve it and then tidy up.  The best part is, obviously, you don’t have to do it yourself and you don’t have to pay for it, because what are robots for if not inventions of our own unbelievable laziness? 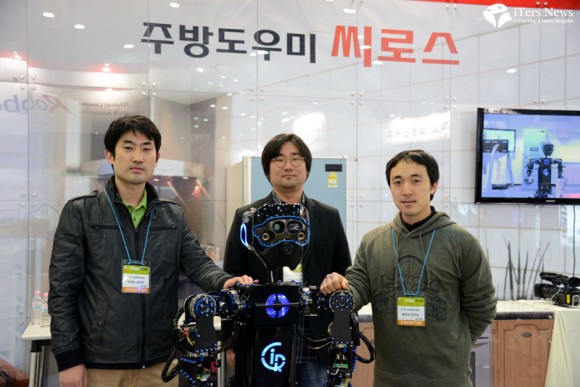 CIROS uses a stereoscopic camera and a 3D IR sensor, similar to the Microsoft Kinect, in its head, which it uses to recognize its surroundings. And speech recognition is made possible with a 12-piece microphone array. The robot is short, at about 5’3”, but heavy at a whopping 330 pounds and can detect and avoid obstacles in its vicinity thanks to a pair of laser range finders and six ultrasonic sensors in its body.

Researchers at KIST started developing CIROS in 2005 and the robot is currently in its third incarnation. I can’t help but think of Rosey the Robot Maid from the Jetsons and how scarily close might be to that reality — and how exciting it is.

One Response to “Laziness is the Mother of Invention: CIROS Is Here to Make You A Salad”