Whether you’re the proud owner of a new PlayStation 4 or Xbox One, the creator of a high flying gaming PC, or a humble mobile gamer, chances are you’re still a sucker for some good ol’ retro gaming: enter the Hyperkin Retron 5.

This strange beast of a console showed up at last month’s Consumer Electronics Show 2014 where its creator and manufacturer Hyperkin showed off a finalized model. The Retron 5 has been in the works for some time and will succeed the popular Retron 3 model which merged three retro consoles into one – a machine that Hyperkin hope to champion in every was possible.

Sporting not one, not two, but five separate cartridge slots, the Retron 5 is able to play thousands of original retro videogames for the Nintendo Entertainment System, the SNES, the Game Boy Advance, the Sega Genesis/ Mega Drive and the Japanese exclusive Nintendo Famicom.

But that’s not even the best part.

Go and talk to anyone that has dusted off an old video game console and tried to hook it up to a modern high-definition television. Their tales of woe will include blurry pixels, washed out colors, a mess of cabling and, in some cases, modern televisions that don’t recognize old gaming hardware at all.

Hyperkin are confident that they’ll do away with all of those issues by having the Retron 5’s video and audio output over a single HDMI cable, offering a 1080p signal for the best possible picture on current HDTVs. The device also comes with a single bluetooth controller to reduce on cable clutter, although original retro controllers can still be plugged in. 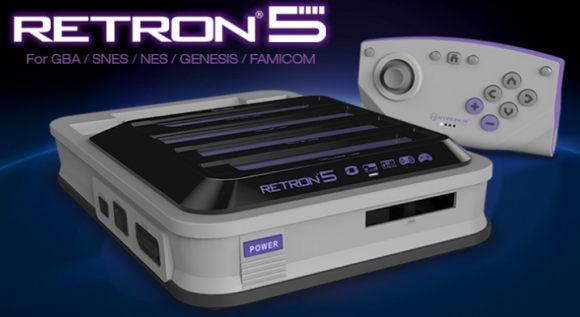 Other features include various on-screen visual filters, the ability to slow down or increase gameplay speed and the option to create “save states” which allow longer games to be played over several sittings.

Retro game collectors will also be happy to know that the Retron 5 is completely region free. It also allows original Game Boy and Game Boy Color games to be played through the Game Boy Advance cartridge slot and the Sega Genesis/ Mega Drive slot also accepts the somewhat rare Power Base Converter – a piece of original Sega kit that allowed 8-bit Master System games to be played.

Hyperkin’s Retron 5 isn’t out quite yet, but is due for an early 2014 release. And with an enticing $100 pre-oder price point, it’ll likely find a home beneath HDTVs the world over.

Update: Hyperkin have confirmed via Twitter that the Retron 5 outputs a 720p signal via HDMI rather than 1080p. Thanks to Dan in the comments for pointing that out to us.