Thanks to an innovative human-machine interface crafted at MIT, HERMES, a disaster relief bipedal robot boasts human reflexes and balance. 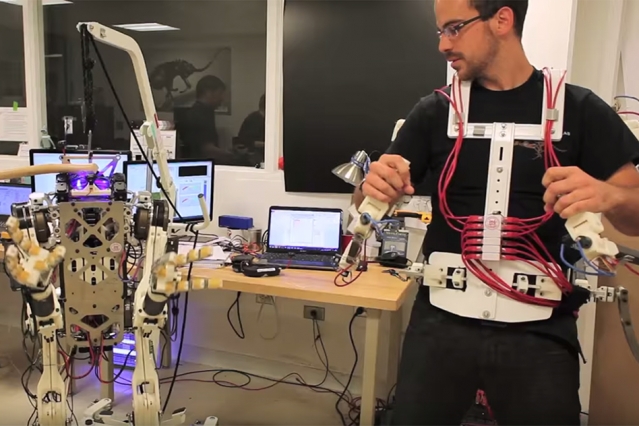 PhD student Joao Ramos demonstrates the Balance Feedback Interface, a system that enables an operator to control the balance and movements of a robot, through an exoskeleton and motorized platform. Photo: Melanie Gonick/MIT

HYAH! And this little guy can karate chop with the best of ’em!

Joao Ramos, of MIT’s Department of Mechanical Engineering and his colleagues, including PhD student Albert Wang and Sangbae Kim, the Esther and Harold E. Edgerton Center Career Development Associate Professor of Mechanical Engineering have created an adept-at-moving robot, HERMES, and the means to research the very way humans balance and react so smoothly in their own movements.

With the aid of someone wearing an exoskeleton platform of metal bars and wires attached to the waist, HERMES mimics the controller’s movements and impulses.

When a thrown punch connects with a wall of sheetrock, electrical signals strike the human’s waist causing the sensation of having to move back to balance oneself. HERMES then feels the movement near instantaneously and rather than fall through the broken wall, the bot pivots backward on its metal feet to stay upright, just as its human counterpart does the same.

With computer software, the researchers translated the robot’s center of pressure to the platform’s motors, which apply comparable force to the exoskeleton, pushing a person back and forth as the robot shifts its weight.

So HERMES walks upright and reacts to force far better and quicker than a robot relying on visual cameras alone.

The MIT team outfitted each of the robot’s feet with polygonal load sensors measuring the force exerted on the ground as it steps and stands, so HERMES can have the same split-second reflexes humans are born with.

HERMES sends impulses that strike the direction of mis-balance in the controlling human’s interface, and then as the human reacts to this and balances to avoid the fall, so too does HERMES.

Invaluable research into the dynamic and often spontaneously smooth movements of humans, where reactions drastically alter the need for quick balancing acts, is being made through the use of this system and the hundred pound bot.

PhD student Albert Wang elaborated on the importance of the research: “These experiments show the versatility of the human operator. In one test, the robot unexpectedly got its arm stuck in the wall. But, because the human was in the loop, the operator could arrive at a creative solution which was translated directly to the robot,” Wang says.

“Our next goal is to try more complex coordinated movements such as swinging an axe … [these] actions are difficult for many robots. If the robot stands stiff while pushing on a door, it tends to tip over. You have to lean your body weight into it and catch yourself as the because it’s so natural to humans, you can have the human do it.”

The data provided by HERMES could soon help to bring humanistic reflexes to autonomous robots (without their human counterparts, beware of Skynet and the flood of incoming Terminators), making the future one where two-legged bots walk and work among us all on their own.