If you’re like most Americans, you’re probably too lazy to walk anywhere… let alone walk your kid to school. And in the era where wars are fought by remote control and intelligence is gained against our enemy using unmanned crafts from thousands of miles away, there is growing sense that every moment, at anytime, someone might be watching us. Now, people can build these drones in their own backyard. Meet Paul Wellich, a Vermont based robot enthusiast who built a DIY, camera-equipped arducopter to follow his kid a quarter of a mile to the bus stop that takes him to school.

Wellich probably had that same feeling we all do: not enough time to finish that cup of coffee or eggs before you rush out the door; just one of the multitudinous quagmires that are a symptom of being an adult with responsibilities. In Wellich’s case it was walking his grade-school-age son a couple hundred meters to school.

He thought: why couldn’t I stay home watch him walk to the bus stop on a couple of computer screens, like some kind of boot-strapping intelligence agency. So he bought a quadcopter kit, a few circuit boards for GPS tracking and sensors, and some open-source software to connect everything to his computers. He also rigged the copter up with a smartphone with a video chat app and a beacon in the child’s backpack so he could follow his every move. 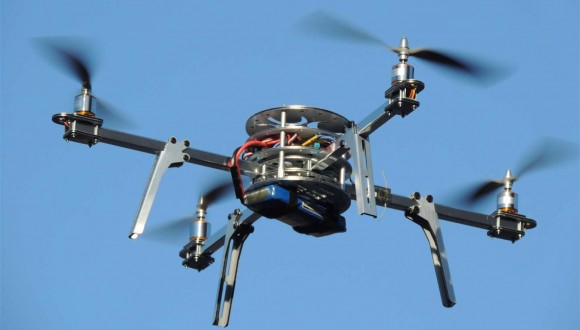 Did it work? Apparently, the drone is shaky in the wind and the GPS tracking get’s a little lost after 10 meters. Wellich offers this solution, “I either have to follow automatically above the treetops—where I can’t really see what’s going on—or else supplement the autopilot with old-fashioned line-of-sight remote control. Which somewhat defeats the original plan of staying warm and dry while a drone does my parenting.” Yes, while the drone does his parenting.

He is also building some more sonar units for collision control and the battery life is a little short. Other than that, Wellich will probably have a whole line of robots taking over his role as a father in no time. And in the future perhaps we’ll be able to replace “daddy issues” as the source of our tortured circumstances with “robot issues.”

One Response to “Drone Parenting: Dad Builds a Quadcopter to Follow Kid to School Bus Stop”