The Duke is back!

Duke Nukem 3D nearly single-handedly promoted the burgeoning first person shooter (FPS) video game genre to a popular and all out fun framework for anyone who could handle a mouse, keyboard or controller.  Wolfenstein 3D and the DOOM series began the innovative realism that fans and gamers have come to crave in FPS games today, but it was the over the top ass-kicking Duke that launched the FPS into the limelight.

At the time that the Duke began, no one had ever seen anything quite like it.  Duke Nukem is a stereotypical pro-American meathead merging of Rambo and a blond flattop.  The character curses with witty vulgarities, such as:  “I’m gonna rip off your head and shit down your neck”, and fights against bloodthirsty aliens trying to steal earth’s women.

The initial Duke Nukem 3D release was for the PC (or computer for you console-only gamers), though a largely stripped down version would come out on the Nintendo 64 gaming console, which subtracted the overtly naked breasts of the strippers and the peep show girls.  But the humor and the overtly fun gratuitous violence was so exaggerated that no one could confuse the Duke of being too real; it was just fun, plain and simple. 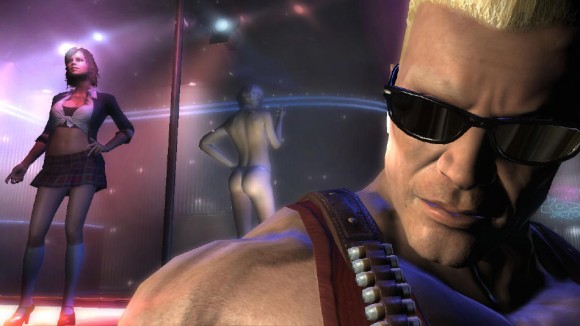 Duke Nukem Forever is about to finally follow-up its predecessor after fourteen years of company/creator debacles and bankruptcies.  The game is one of the most highly anticipated FPS endeavors of all time, and Gearbox Software (Borderlands) is at the helm to ensure that the graphics and the smooth mix of satiric humor, scantily clad women and alien destroying are central to its beauty.

The Duke Nukem Forever trailers point to a gorgeously developed game that is chock full of gripping narrative and, no wait, there was a gargantuan three-boobed alien and a boss who gets his head kicked through a field goal post!

Hail to the King baby!

One Response to “Hail to the Duke Baby”