Gadizmo was founded in October of 2006 by Charles LaRocca. After years of stressing out about the Holidays and the troubles of figuring out what presents to buy and what gifts to ask for, he set out on a search to find some original gift ideas. After realizing just how many new, unique, and weird gadgets there were out there, this website was born. 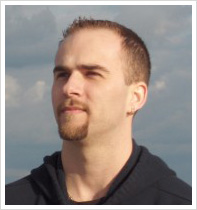 Charles is a Boston based web developer and gadget lover with the admitted writing ability of an 8th grade honor student. He has spent the majority of the last 11 years working online but, when he manages to peel himself away from his workstation he is a big fan of riding his motorcycle in the summer and skiing in the winter. An interesting fact about Charles is that his biggest hang up lies in his inability to write about himself in the 3rd person which often leaves people disappointed in his lack luster bio.

Aside from scribing about tech and gadgetry for Gadizmo, R.J. Huneke brings his rampant coffee habit and his penning of Rune Works to his upcoming commercial thriller titled Cyberwar. He was first published as a columnist for Newsday, though art in the form of drawing, reading and writing began at the age of four and has yet to abate.