Venus: goddess of love, beauty, some other things, and Steve Jobs’ new yacht. Wait, Steve Jobs has a new yacht… isn’t he…? Yes, Steve Jobs is very much, sadly, dead, but unveiled yesterday in a shipyard in Aalsmeer, just South of Amsterdam, and released into an “anonymous Dutch backwater,” a luxury motor yacht commissioned by Jobs and designed by mega-famous product designer Philippe Starck was finally released.

The yacht, Venus as it has been named, was built by the 130-year-old Dutch ship builder Feadship and was first conceived by Jobs in 2007. Jobs approved initial sketches by Starck only on his second try. The 256-foot, all aluminum vessel is minimalist, with teak wood floors and large pane windows. Venus, in its behemoth grandiosity could be seen as Jobs’ last testament – a monument to his holy belief in the unity of impeccable design and flawless engineering.

Jobs’ widow Laurene and three of their children, Reed, Erin and Eve, were at the ceremony celebrating the launch of the yacht and gave each of the members of the shipbuilding staff a thank you note and an iPod Shuffle with the name of the ship inscribed on the back. The Venus is also said to have seven 27-inch iMacs on board, of course. 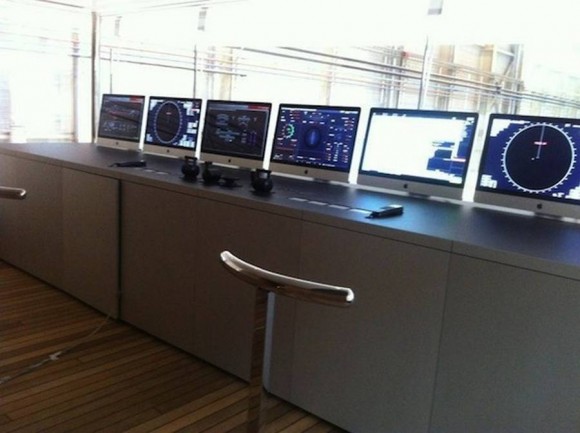 Jobs, who was suffering from pancreatic cancer knew he might not live to see the completion of his yacht, but did not halt production for fear that it could be construed that his demise was imminent. According to Jobs’ biographer Walter Isaacson, Jobs said, “I know that it’s possible I will die and leave Laurene with a half-built boat. But I have to keep going on it. If I don’t, it’s an admission that I’m about to die.”

This Modular Jet Ski Fits in the Trunk of Your Car
Kymera Electric Jet Board – Who Says Water and Electricity Don’t Mix?
DiveBot: Underwater ROV on the Cheap
Become The Next James Cameron With Your Very Own Remote Submarine
Water World: A Jacuzzi For The Sea
Quadski: 45 MPH on Land and Water