Introducing the Gibbs Quadski, possibly the world’s first most versatile amphibious vehicle. For those on secret, covert missions or perhaps those who simply love the sport of jet skis and ATVS, the Quadski offers an incredibly impressive amalgam of the two. At the click of a button, this patented High Speed Amphibian is ready for land and water in a matter of seconds, setting a new standard in “flexibility, freedom and fun.” 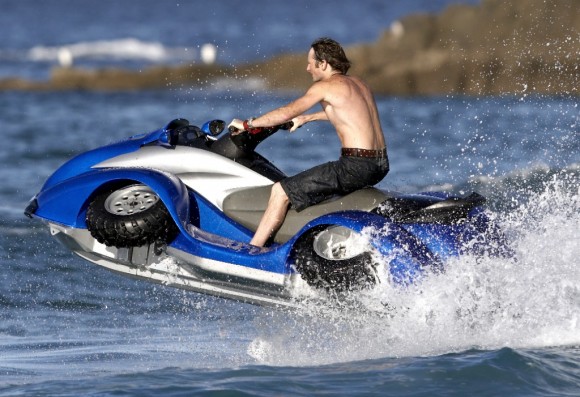 Under the hood, the Quadski sports an impressive BMW Motorrad K1300 engine that is capable of attaining speeds of up to 45 miles per hour on land and water. The 175-horsepower 1.3-liter 4-cylinder engine also has a 6-speed transmission offering maximum control. The engine is also coupled with a patented water jet propulsion system giving an excellent performance that combined with a lightweight body and low center of gravity offers unprecedented stability. 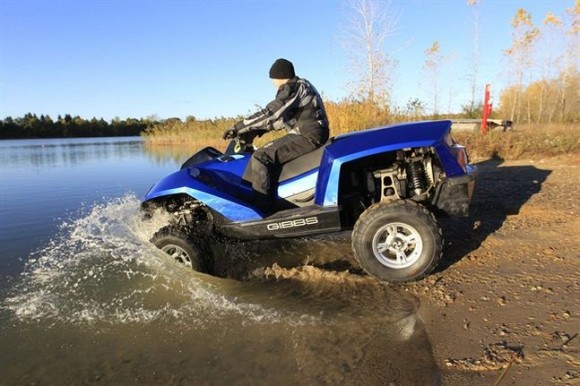 The real magic of the Quadski might lie in its incredible wheel retraction system. With the push of a button the transfer between land and water is almost seamless with Gibbs’ High Speed Amphibian (HSA) Technology. And with Quadski’s fiberglass composite hull, which is manufactured from a single-piece mold, this baby is a dream come true for enthusiasts who never thought such a machine was possible.

The Quadski dates back to 1996 with the initial idea proposed by New Zealand entrepreneur, Alan Gibbs, but the concept began to be developed in 2003 with company chairman and engineer Neil G. Jenkins. The first prototype was built in 2005 and official production is scheduled to begin this month with 1,000 models scheduled to arrive at retailers in November. The price will be around $40,000. With the Quadski, your Summer vacay will never look the same.

This Modular Jet Ski Fits in the Trunk of Your Car
Kymera Electric Jet Board – Who Says Water and Electricity Don’t Mix?
DiveBot: Underwater ROV on the Cheap
Become The Next James Cameron With Your Very Own Remote Submarine
Water World: A Jacuzzi For The Sea
Steve Jobs’ Luxury Yacht Called Venus Released in Dutch Backwater

4 Responses to “Quadski: 45 MPH on Land and Water”