Rethink Robotics has spawned a new wave of semi-autonomous robots for conducting industrial tasks that require extreme precision, and they call him or her Sawyer.

The one-armed bot has an Intera 3 software platform for a brain and a tablet-like screen as its face.

Seeing it move and interact with projects is truly amazing and somewhat awe-inspiring.

Factories, mines, and any machine shop could greatly benefit from the bot. 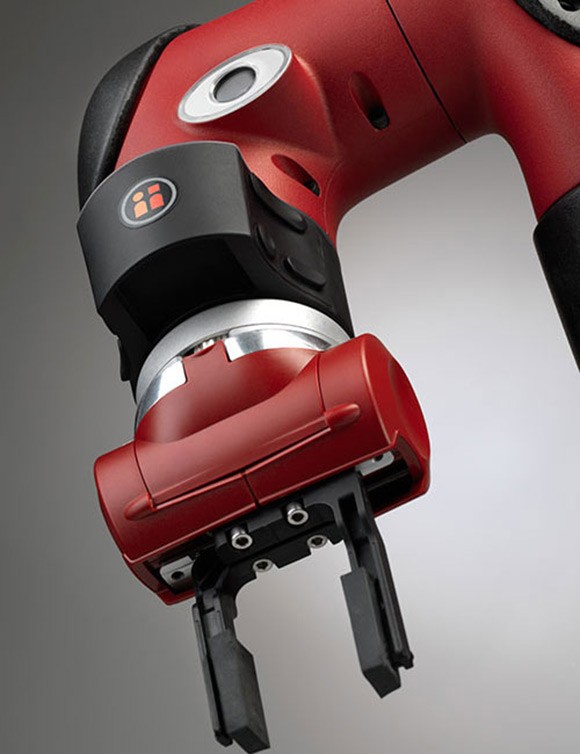 But the effect of seeing Sawyer is a little unnerving.

Though the Jarvis powered armies of similar one-armed bots that Tony Stark had outfitted his work floor in the flick Iron Man have personality that is only with the old butler’s English accented voice serving as the A.I.

Sawyer is a bit more flexible and more than a little menacing.

Maybe it is the octopus tentacle-ness or the Ferrari red shade of Sawyer’s skin, I mean metal shell.

The bottom line is that the 42-pound robot has one adept claw, or hand, that can handle eight pounds of weight and expertly manage high precision tasks, including soldering and building circuit boards.

Sawyer has seven degrees of freedom with just a hair over one meter of reach to maneuver in and out of tight spaces.

And Sawyer’s compliant motion control allows it to feel for machines, like a human would.

Sawyer can manage entire assembly lines or individual projects working alongside its human counterparts while adapting to real-world situations and problems.

If you have seen The Matrix or Terminator, then you had better hope these things do not go rogue, because Sawyer has the physical and thinking skillset to build and put together computers and other robots, like itself.

Please note that Rethink Robotics says that Sawyer is a friend, and that the bot was built with safety [in mind and an] interactive user experience that have become synonymous with our brand.

For $29,000 Sawyer can safely build and chaperone your own personal robot army in mid-2015.

One Response to “Meet Sawyer The Trainable One-armed Robot”