Kogoro Kurata’s childhood dream was to grow up and take over the world. No not really, but Tokyo, Japan based artist Kurata did grow up watching an overdose inducing amount of manga and science fiction films. His father was also a blacksmith who taught him how to make lethal samurai swords and he developed a fondness for metalworking. 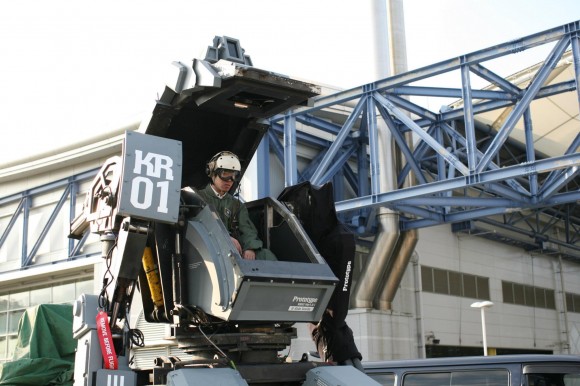 Kurata’s new invention is a 13 foot tall, four ton “mech” (a giant man piloted robot killing machine from the science fiction niche genre mecha which centers around robots or machines) that is also powered by an iPhone or by a pilot in a one man cockpit inside the robot’s body cavity. Oh and the robot’s artillery fires 6,000 bullets per minute when the pilot smiles – how’s that for completely demented?

But Kurata didn’t build the KR01 Kuratas Battle Mech to take over the world, he built it just to say he could.  The KR01 Kuratas Battle Mech is truly a sight to behold. Powered by a diesel engine and four wheels attached to four legs, the Battle Mech is a collaboration with mecha fanatics Wataru Yoshizaki and Yuke Kitani in a venture called Suidobashi Heavy Industry, “An organization which aims to spread human ride robots.” The robot also comes with a range of customized options from paint scheme to cup holders perfect for setting down that Big Gulp whilst terrorizing your neighborhood.

The KR01 Kuratas Battle Mech, which took roughly two years to make, was recently unveiled in Japan with a price tag of 1.3 million dollars (yes, you can go to the Suidobashi Heavy Industry website and actually buy one). And yes, people are already dreaming of what they’ll do with one, like this comment left on the Battle Mech’s facebook page, “I had a dream where I was hunting Albino Peacocks in the Kuratas.” Which leads me to question… are we really ready for giant killer robots you can buy on the Internet? Maybe not, but gee golly they are cool.