This Indiegogo crowdfunding smash-hit, the iPin, gives the seminar speaker a laser pointer and a presentation clicker on their own phone to perform wireless presentations. 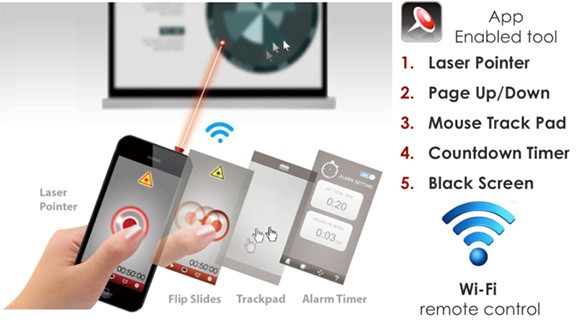 Now what did Dr. Evil want in a successful evil organization?

An easy to use functioning laser system, and in particular . . . “frickin’ sharks with frickin’ laser beams” and they are now available thanks to the iPin working iOS and Android alike.

Collaborating with Conary Enterprise, the company behind the original iPin for iPhone, HYPER by Sanho Corporation jointly developed the new iPin for Android and the added powerhouse BTtogo.

Alone, the iPin can give you wireless control of presentations.

Plug the tiny iPin into the headphone jack on an iPhone or iPad, or into the USB on a Droid, and laser point and slide those office PowerPoint’s with relative ease, though some setup is required on the host computer (used to project the presentation).

Is the setup really that difficult?

Nah, but you have to make sure all of the running devices are on the same WiFi network and running in tandem, recognizing each other like old friends.

We have all been there, folks.

You are running late to the convention center where your eager listeners are awaiting your presentation with the patience of a split pea.

Hooking up the computer to the arena’s WiFi is not too hard, but you have to connect the iPin to the same network, bypass the rigid security firewalls in both cases, test the connections, and queue up the slideshow to end all slideshows.

To eliminate that little bit of effort, HYPER spawned the BTtogo.

The iPin teams up with this tiny thumb drive lookalike called the BTtogo, which makes it easier for performing wireless presentations anytime, anywhere.

This bad boy will tap into any computer, even public ones, and connect it to your iPin-laden device for instant control, even with security firewalls and no WiFi.

The iPin plus the BTtogo equals a plug-and-play system with virtually zero setup.

For $65 you contribute and get an iPin/BTtogo combo.

And for Apple fans out there, The Woz, Steve Wozniak, has been actively testing the iPin!