The answer to what is in a name gets visceral with the very tangible Doctor Who Wood Name wooden sign carved in an intricately posed series of symbols.

What could be more Geek Weekly than Ancient Gallifreyan?

And more importantly, how did anyone get the infamous science fiction character, the Doctor’s name?

For over fifty years the tales have regaled the galaxies.

The many yarns of the time traveling hero who refuses to fight physically or kill other beings (most of the time, right Daleks), but instead relies on wit and words to save whole planets, systems, and people, do not cease to amaze.

And amidst the epic Time War, the horrid Invasion of the Zygons, and the crack tearing apart Amy Pond’s universe, there is an unanswered question that remains: what is the Doctor’s name?

Who is Doctor Who?

The closest hint we have to that labyrinthine query comes from the episode “A Good Man Goes To War” (Season 6 of the 11th Doctor) where the Doctor is revealed as a baby in his crib. 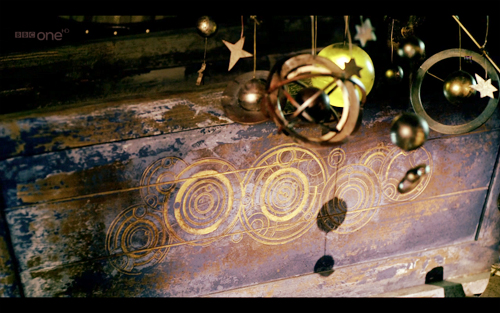 The common consensus was that the symbol etched on the side of his crib was actually the Doctor’s name in Ancient Gallifreyan, and so the gurus over at Woodentek have crafted a gorgeous, handmade Doctor Who Wood Name wall sign that brings that wooden carving alive for less than $30 US on Etsy.

A beautiful series of symbols containing circles and possible orbits adorns what could just be Doctor Who’s name.

Whether it is or is not the name, the carving is certainly written in Ancient Gallifreyan and a part of the Doctor Who mythology.

This piece is pasted with a veneer sheet of Sapele, is hand-stained and finished, and incredibly detailed. And it weighs in at 17.25″ x 5.25″ and a sturdy 1/8 of an inch in thickness.

And perhaps most impressive and right with the Doctor’s own wishes is that this wooden sign is an eco-friendly product, using only wood certified FSC and PEFC from 100% well-managed forests.

Now where is my Tardis? I have to go back in time and think of coming up with this one!