The sweet and innocent days as a youth playing the shiny new beige and gray Nintendo Entertainment System in the 1980’s are long gone, but the nostalgia for embracing the classics and retro gaming has never been stronger, so let us all drink to the NES with the Gaming Cartridge Flasks! 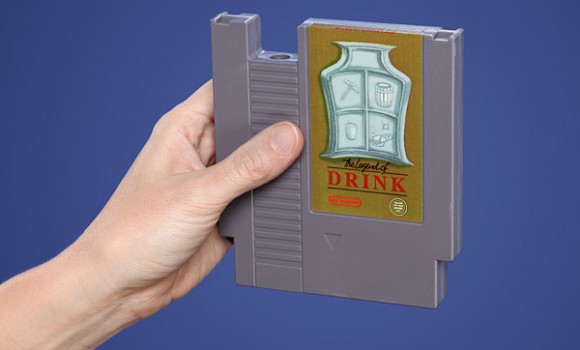 A new twist on the 8-bit duck shooting marksmanship NES title is to grip the Nintendo Zapper (gun) and try and outplay your friends as you drink to every one of the missed shots, and twice for every time that ugly dog shows his head and laughs at you for missing all of the flying quacks.

The drinking game aptly titled Drunk Hunt has been around since NES gamers turned the age of 21, and ThinkGeek has paid homage and helped to keep the sport (that is challenging beer pong more and more each day) alive with a “Drunk Hunt” Gaming Cartridge Flask for a penny less than $20.

These flasks are made out of the same great durable plastic NES cartridges that we know and love.

There have been minor upgrades internally, of course.

We do not, after all, want to inflict the dangers of plastic on our bodies, so these six ounce capacity flasks are constructed with BPA-free food-grade ABS polymer, and even the label is made from high-strength vinyl so some contact with liquids is A-ok.

But instead of the standard label, they are being outfitted with one of three great takes on classic titles that have become legendary in recent years: “Drunk Hunt,” “Fine Ale Fantasy*,” and “The Legend of Drink.”

*Fine Ale Fantasy is being released in the very near future but the others are out now!