Most artists have a different way of looking at the world. The same applies to the way they traverse it. Deep in the woods of Nikola-Lenivets, Russia – which is a rising bohemian and artistic community about 4 hours from Moscow – an Estonian architecture firm Salto has built a 170-foot-long trampoline road. Now visitors to this remote creative enclave can hop and leap to their hearts desire while they sing free in the beautiful Russian sunshine. 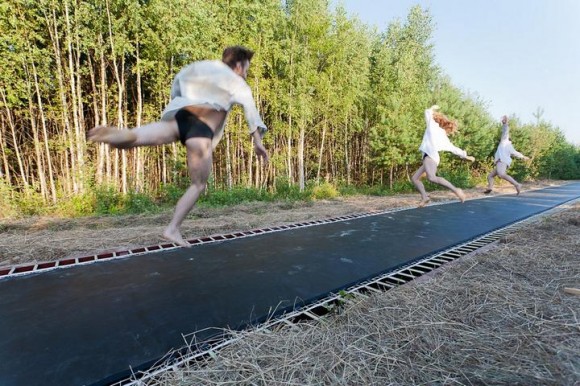 The foot path, which is called “Fast Track,” was designed by Maarja Kask, Karli Luik and Ralf Lõoke of Salto – which in Latin means “to leap or jump” and in gymnastics refers to a somersault – to challenge “the concept of infrastructure that only focuses on technical and functional aspects and tends to be ignorant to its surroundings.” And the surroundings they are referring to are a wooded bucolic utopia that artists, craftsmen, architects and more have slowly been moving into – some full time – since the late 1980s.

In a 2010 article by the New York Times it called Nikola-Lenivets, Russia “something out of a 19th-century Russian novel about artists, aristocrats and their acolytes mingling at a pastoral country estate.” Many credit contemporary artist and madman Nikolay Polissky for making the village an outpost for modern art. Since 2000, Polissky has been hiring peasants and residents from nearby villages to create objects around the village, such as armies of snowmen, towers made of hay, firewood, rods. 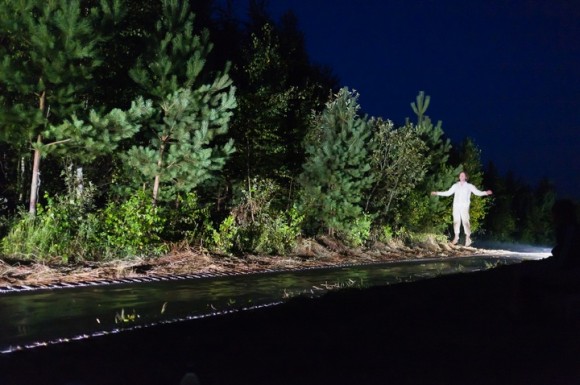 The trampoline road was commissioned by the promoters of Archstoyanie, an annual festival of architecture and design, held every summer in the village since 2006. It should be interesting to also note that the village of Nikola-Lenivets, where you can now visit the world’s longest trampoline footpath, was named after someone named Nicola-the-Lazy-Bones. There is no information on him anywhere, but I’d assume he’d be proud of his namesake.