Take the highly successful Borderlands series last two game installments, recreate them in high definition, and throw in a limited Claptrap, and you have one hell of a robot connoisseur’s holy grail in Borderlands: The Handsome Collection – Claptrap-in-a-Box Edition. 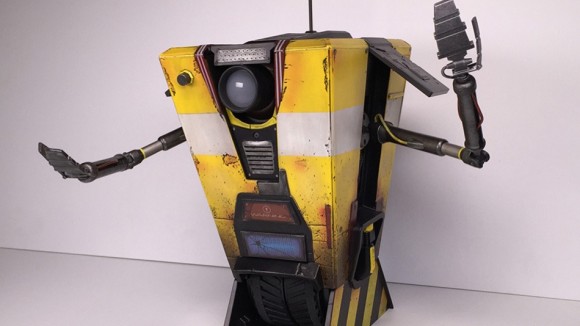 Wait, what’s that they’re saying over at Gearbox?

Introducing the CL4P-TP steward robot, from your friends at Hyperion!

Claptrap is officially real and is rolling into walls courtesy of your own remote control ClaptrApp App.

There is a game collection worth noting too. The Borderlands: The Handsome Collection that brings Handsome Jack’s ruthless role as CEO of Hyperion to the Mad Max-like dystopian game series, upgrading both Borderlands 2 and Borderlands: The Pre-Sequel to HD, while loading up on new features.

Think GoldenEye but in the Borderlands worlds, in HD!

And this set even transfers your last generation console saves to the new PlayStation 4 or Xbox One.

Every campaign add-on imaginable is packed in with cross-save from any device to the next gen systems, but let’s get back to the bot, folks.

The taxman can help us set aside money for this, right?

Standing in at nearly eleven inches tall and weighing – oh who the hell cares what he weighs – Claptrap moves where you tell him to via your smartphone.

He will cry and/or curse at the drop of a hat and has a library of dirty phrases to say while his single wheel rolls him around like a mutated Segway gone horribly wrong.

You can even speak through the minion’s voice or see (and stream live) through his eye!

I, for one, NEED this bot for my collection at any cost!